My photography is going vintage.  During lock down I have far more time than what I know what to do with.  Looking on eBay I saw a Halina A1 TLR camera for very little money and decided to bid on it.  I was the only bidder and won.  It was delivered promptly and as expected, the focus helicoids were frozen by the grease used in manufacturing.  The reflex mirror and ground glass were also quite dusty.  After watching repair videos on Ricohflex (Halina A1 is a direct copy of the Ricohflex) I was able to release the helicoids and lubricate with modern chain oil.  Also had to reset the focus the lenses.  After cleaning the reflex mirror and ground glass, the waist level finder is quite useable in daylight.  The leatherettes were failing apart.  I therefore decided to remove them all and painted the metal in silver.  Here is the camera after my mods and fully working 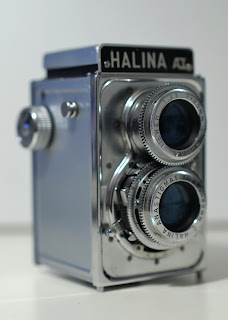 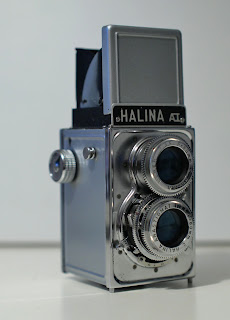 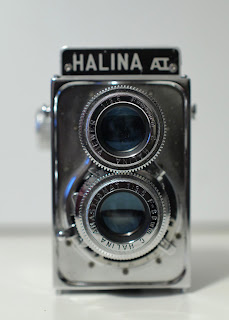 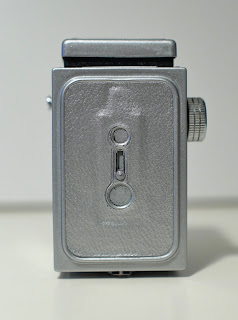 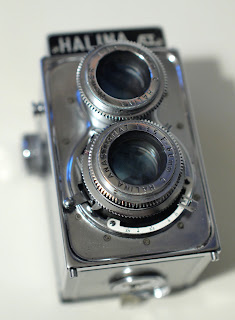 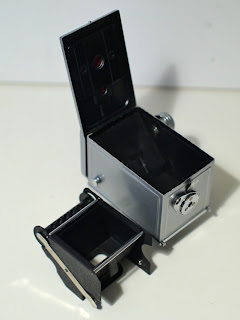 I loaded with 135mm Kodak Colorplus 200 film for sprocket photography and also to test the camera works.  You really do not know if a film camera works until you run a roll of film through it.  I made sure to taped up the rear red window and the tripod socket mount to stop light leak.  These are the results.  They were shot on a sunny day during a walk in London. 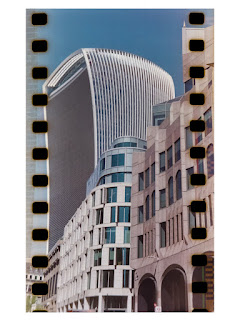 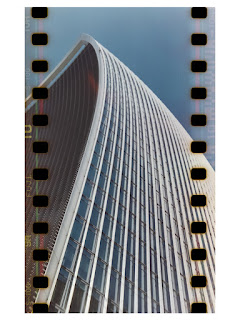 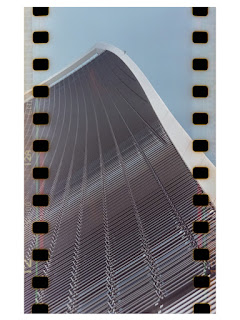 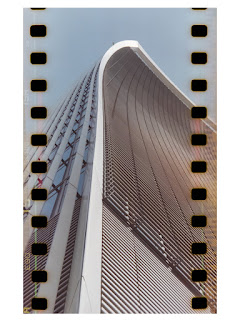 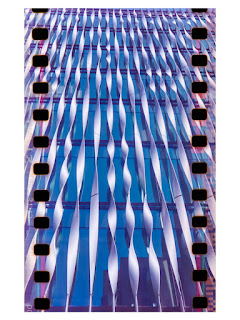 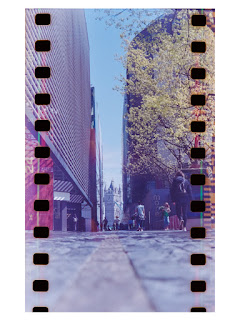 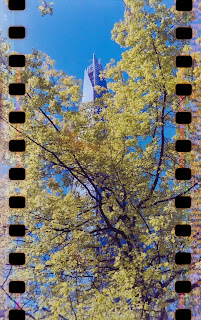 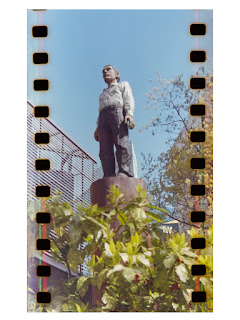 In summary, I was able to get quite good results from this camera, I do have some reservations about it.  The camera is very light and the focus screen reasonably bright in day light.  The lack of shutter speeds is very limiting.  During the day, with the 1/100s max shutter speed, I had to stop down the lens to F16 or smaller all the time.  It will not be able to get shallow depth of field images.  This make the camera unsuitable for portraits.  Also the lack of slower shutter speed will restrict it use during low light situations.  During good light, you can get good results but very limiting.  It may now be used as a display camera at my home.  Although I do intend to shoot with it now and then.
Posted by Yat Tang at 1:13 PM No comments: 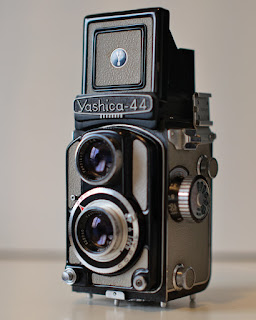 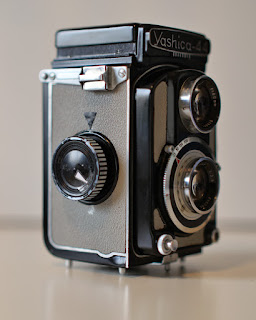 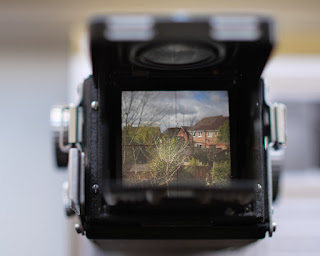 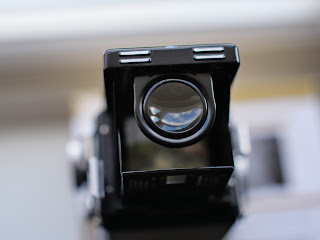 Recently I want to shoot film again.  I started photography shooting mostly with ranger finder cameras and then moving onto Canon SLR finishing with EOS 50E.  While looking through You Tube I came across a video of Yashica 44 converted to shoot 35mm film.  I was curious and found the camera quite cheap.  I purchased my camera at £50 on ebay fully working.  I did some cleaning of the camera lens, ground glass and reflex mirror.  The camera has a 60mm f3.5 lens with shutter speed of B, 1/25, 1/50, 1/100 and 1/300s.  Originally it uses 127 film which will results in 4x4cm square images.  12 images to a roll of film. Focusing was not as easy and I had to use the magnifying glass for critical focusing.  Framing was difficult as everything is opposite and took some getting used to.

Converting to shoot 35mm film was very easy, by just unscrewing film roller which allow 35mm film to be loaded.  I won't go into too much details about the conversion, you can see how it is done here.

After a day of practising with the camera at home and taking it on walks, I was ready and went to London on an afternoon photo walk.  The film loaded was Fujicolor Superia Xtra 400.  It had expired long time ago but kept in my freezer so hoping it will be in good condition.

I took a walk in London with this camera with a light meter app on my phone.  Here are some photos I shot on the day. 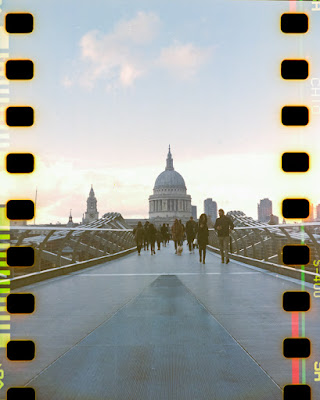 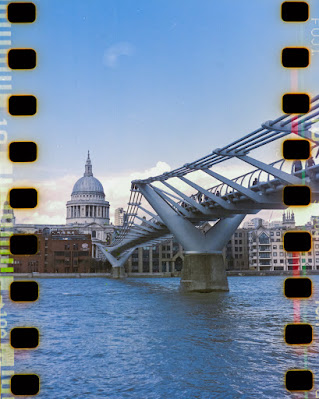 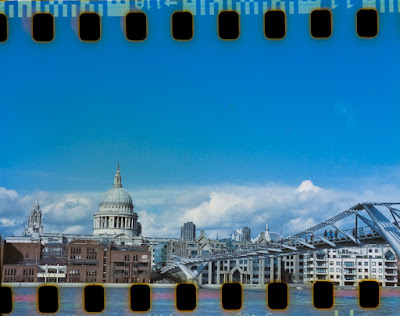 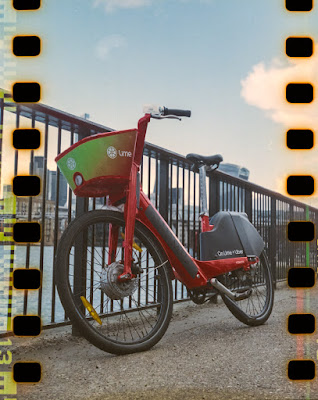 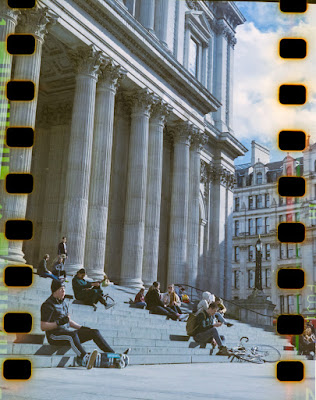 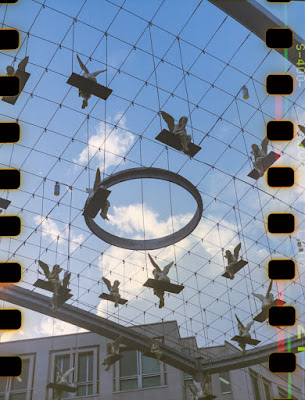 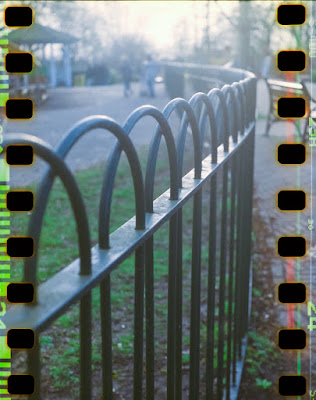 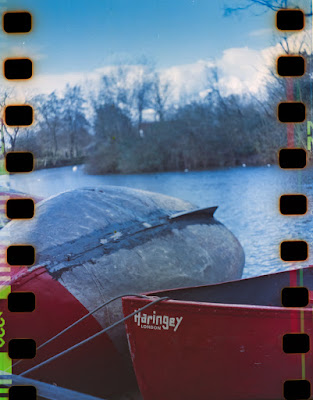 I found the back to front view finder difficult to get used to.  The landscape shot above was very difficult as the view finder was back to front both vertically and horizontally.  Next time I will use the sport finder.  One thing I had to do was to unload the film in a changing bag at the end of the day.  This camera was not design for 35mm film and there is no way to rewind the film back in the cassette.  I had to do it by hand in the dark.  Overall, I am happy with the results and can't wait to get out with the camera again.  Maybe some portraits?
Posted by Yat Tang at 11:06 AM No comments:

I recently acquired the 7 Artisans 35mm F0.95.  With the pandemic lockdown, it is difficult to test the lens properly.  All I can do is run comparisons between the Zhongyi 25mm F0.95 and Kamlan 50mm F1.1.   Do note they are all manual focus lens and all have clickless aperture rings.  I personally do not like clickless aperture ring for photography.  Tt is too easy to move the aperture ring by mistake.  Also, the Kamlan lens was the only one to come with a lens hood.  I use screw on hood with the other two.  Before I start, here are a few photos shot with the 7 Artisans lens at F0.95.  All the photos taken for this review was shot using Panasonic GX9.

Here are the lenses side by side.  The 7 Artisans lens is by far the largest and heaviest here.
For this comparison, I will test at the fast apertures F0.95/F1.1, F1.4, F2.0 and F2.8.  Also, I framed all the lenses to give similar crop.   I bought these lens to shoot mostly at F0.95 or F1.1.  I am very unlikely to shoot at aperture smaller than F2.8.  The focus point for all the imaages is the front of the R2D2 figure.
F0.95/F1.1
Let's start at F0.95/F1.1.  First of all, the Zhongyi lens is by far the worse for vignette.  Also the exposure was very dark compared to the other lenses.  The Zhongyi images has +0.6 exposure added in Lightroom, but no vignette correction applied.  In term of background blur, there is not much difference between them, but Zhongyi lens gave the most background blur.

Verdict
Each lens gave slightly different perspective.  The Zhongyi lens is by far the sharpest, followed by 7 Artisans and lastly Kamlan.  For portraits, I would use 7 Artisan followed by Zhongyi.  The Kamlan is still useable just does not reach the sharpness as the other two.  I was surprised how dark the corners were for the Zhongyi lens, but it is by far the sharpest lens here at all apertures.  These manual focus lenses should be used for their characteristic and not absolute sharpness.  For that, there are many lenses by Olympus, Panasonic and even Sigma that are better and they also auto focus.
From this tests I performed here, I would choose the 7 Artisans 35mm over Kamlan 50mm unless you want to shoot at at 50mm.  The 7 Artisans lens is much heavier than the Kamlan lens.  It makes the camera quite front heavy.
In summary, Zhongyi 25mm F0.95 is the sharpest by far, but worse for vignette.  Between the 7 Artisans and Kamlan, they both do not suffer from vignette.  7 Artisans is sharper of the two lenses.  I would choose 7 Artisans over the Kamlan.
From the tests performed here, I would still use the Zhongyi lens as my walk around lens and use the 7 Artisans lens for Portraits.  In the end they all fun to shoot with.